I have recently been creating a new out of the box solution in SharePoint 2013 On-Prem making use of a large collection of pages. I’m very happy with the design, and they have been set up to need minimal customization after initial creation; however, the process of copying my template page to its final location
Read More
I recently came upon a situation where I had designed a beautiful new intranet page for one of our support functions. You know – typical stuff…a nice clean display presenting documents on a page instead of directly in a document library. Everything was going great until testing when I found that the SharePoint 2013  Content
Read More
Over the past few weeks – after settling back in from Ignite – I have been compiling all of my OneNote notebooks, transcribing all of my chicken scratch notes (that only I can read), and putting together decks and watchlists from the conference to share with my team who are scattered across North America, Germany,
Read More 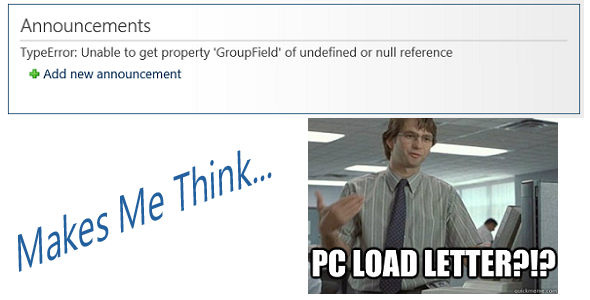 I have recently been working to undo some of the over-governance in how my organization deals with SharePoint and one of the ways I am doing so is in further customizing teamsites. As part of this, I needed to revisit the SharePoint Announcements Web Part. At some point, a decision was made to apply some sort
Read More
Some users might experience problems opening or editing files from SharePoint 2013 on-prem from outside the domain/network when using Office 2016. Specifically, the user might have receive messages stating that the file is corrupt even though other users can open and edit the file. Users external to the SharePoint domain or network would generally be the reporters of
Read More
I recently had a business request from one of my users to help tweak a Request Tracking List. The user essentially wanted to know count the number of days a request had been open, and once a request is complete the counter should stop. This is very useful information to track and is simple to accomplish with a
Read More

I started this blog to post about things that I was using and learning at work, and at the time it was really focused on things in the Microsoft stack – SharePoint, Dynamics CRM, SQL, etc. However, I took a little detour a while back and left the Microsoft world for a little bit. I
Read More
When you first set up your shiny new SharePoint 2013 you probably set up the managed metadata service. When you finally got around to look at it and configure some of it you may have noticed that you got a term set called People…you then probably got really excited when you realized that combined with User
Read More
I was recently working on some simple site collection migrations from SharePoint 2007 to SharePoint 2013 on-premises using Metalogix’s Content Matrix. It’s a very simple move and I wasn’t carrying over any branding or themes from my 2007 site. I did, however, need to apply a new theme (just colors, fonts, & style sheet) to my
Read More
It seems like Microsoft just had this same thing happen in August 2013, another in September. They’ve pulled SP1 for SharePoint 2013 on prem (I know I’m a little late…this post has been a draft for a while). My point is, though, it’s going to happen again. With that in the back of my mind,
Read More